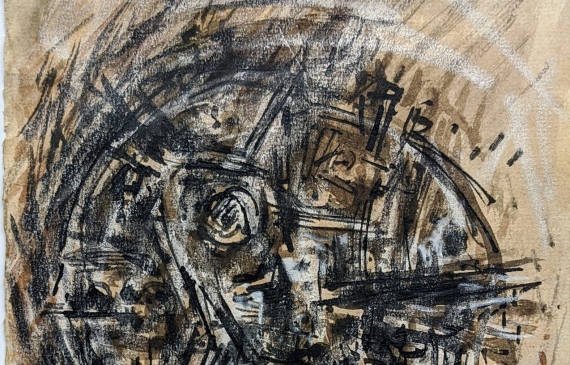 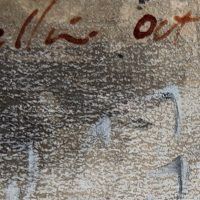 A central figure in the East Village art scene that thrived during the 1960s, poet, painter, sculptor and pioneering multi-media artist Aldo Tambellini (1930 – 2020) has only begun to be recognized for his prescient and innovative art. Born in the US in 1930 and raised in Lucca, Italy, Tambellini lived in an area bombed during WWII; twenty-one of his friends and neighbors died in the assault.

Tambellini returned to the US in 1946. He received his BFA in Painting from Syracuse University in 1954, and received a Teaching Fellowship at the University of Notre Dame, completing his MFA in 1959. He then moved to New York City’s Lower East Side and founded the counter-cultural alliance of writers, artists and activists, Group Center, which invented new ways to present art to the public, outside of the institution.

Aldo and his wife Elsa Tambellini founded the Gate Theatre in New York’s East Village, which was unique and extremely influential in its schedule of showing a program of avant-garde and independent films every day. In 1967, he co-founded, with Otto Piene (1928 – 2014), the Black Gate, a second theatre which presented live multimedia performances and installations. The artists whose works graced their stage and screen included Jack Smith, the Kuchar brothers, Nam June Paik, Yayoi Kusama, Robert Downey and Brian DePalma.

Throughout his long career, Tambellini has worked in a staggering range of media: from his early Arte Povera-style sculptures and abstract drawings done in Italy and America in the 1950s and 1960s, to his experimental work in early video and television art, which he pioneered alongside his close friend and occasional collaborator Nam June Paik, to the series of abstract films he made in the 1960s. His “Electromedia Performances” combined projected paintings, film, video, poetry, light, dance and sound with live music.

Beginning with Black Is in 1965 Tambellini launched a series of politically charged experimental films that explore the expressive possibilities of black as a dominant color and idea. For the most part Tambellini’s seven “black films” are made without the use of a camera but rather by carefully manipulating the film itself by scorching, scratching, painting and treating the film stock as a type of sculptural and painterly medium. Beautifully austere and hypnotically immersive, Tambellini’s films are also important expressions of an artist critically aware of the emergent Information Age and its possibilities. Often using found footage and filmed television, Tambellini’s films take a crucial pulse of the new moving image culture being formed in the Sixties.

From 1976 to 1984, Tambellini was a Fellow at MIT’s Center for Advanced Visual Studies where he held workshops and organized the prescient Communicationsphere, ” a network to develop channels among artists, technician, engineers and performers and all concerned with the impact of tele-communications on contemporary society.” They creatively experimented with technology and communication, producing many works that presage the era of the Internet.

Though he continued to work with the moving image, his focus thereafter tended toward poetry and its performance accompanied by video projections and music.

Tambellini’s works were shown at the Italian pavilion in the 2015 Venice Biennale, and his multimedia performance Black Zero from 1965 was revived at Performa, New York in 2009. ZKM in Karlsruhe, Germany presented a comprehensive retrospective of his works across many media in 2017.