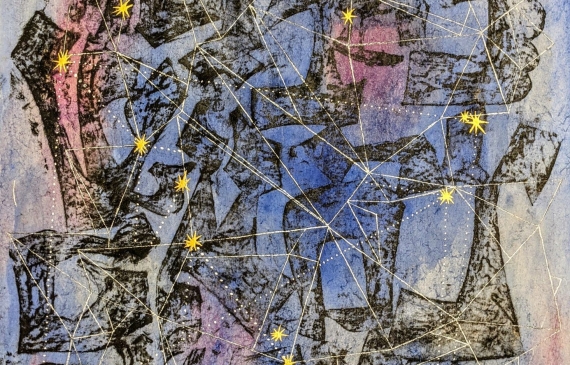 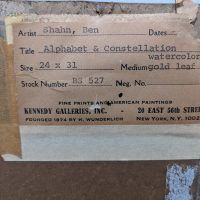 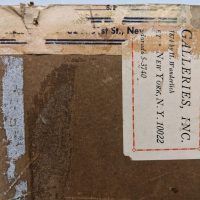 Born in Kovno, Lithuania, Ben Shahn’s early education was informal, consisting mainly of studying passages from the Bible. Copying biblical texts as a child inspired a lifelong interest in lettering and calligraphy, and many of his compositions use words, names, and quotations as formal elements. Shahn’s family immigrated to Brooklyn, New York, when he was eight. As a teenager, Shahn was apprenticed to a lithographer, becoming attuned to considering typesetting as composition, letters as shapes in space, and nuances of line. The spiky sensitive draftsmanship that characterizes his art reflects these experiences. Between 1919 and 1922 he studied at New York University; the City College of New York, a free college; and the National Academy of Design. Sharing a studio in 1929 with the photographer Walker Evans stimulated Shahn’s own interest in photography; he began photographing people and street scenes, first in New York and later around the country. These photographs served as the basis for many of his prints and paintings. In 1932-1933, Shahn assisted the Mexican artist Diego Rivera on an important series of murals depicting labor and industry for New York’s Rockefeller Center. Shahn was employed by the Works Progress Administration in the mid-1930s to design a mural for a federal prison; although that project was never realized, he received many other private and public mural commissions in subsequent years. Shahn’s late works concentrate on universal religious themes–creation and the relationship between the individual and God. A print such as Alphabet of Creation reflects his personal interest in subjects from the Old Testament and Hebrew liturgy, as well as his continued interest in letters as visual elements.

One of the leading social realists of the twentieth century, Ben Shahn’s art is one of protest against injustice and prejudice. His paintings and prints address social and political issues, focusing on the poor and disenfranchised whom he portrays with sympathy. The subjects of his earliest work are victims of political injustice such as Sacco and Vanzetti. From the 1930s on, Shahn’s art has been widely shown in group and solo exhibitions in the major art museums in New York, London, Amsterdam, Brussels, Rome, and Vienna.