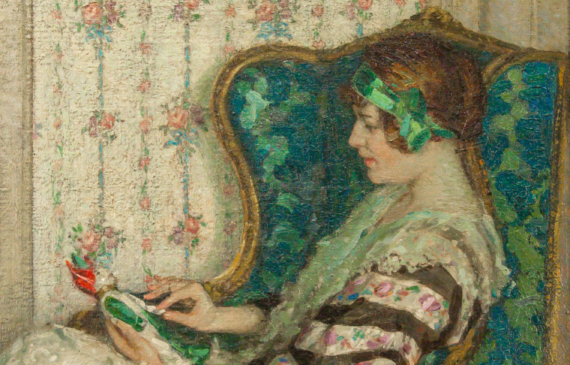 American Impressionist painter Henry Salem Hubbell was born on Christmas Day in Kansas in 1870. In 1887, he began his studies at the School of the Art Institute of Chicago, After graduating high school at just sixteen years old, he moved to Chicago to work as a sign painter.  taught by William Merrit Chase, Dennet Grover, and John Vanderpoel. He married fellow student Nellie Rose Strong in 1895.

Hubbell and Strong moved to Paris in 1898, and he studied at the Académie Julian under Jean-Paul Laurens, Jean-Joseph Benjamin-Constant, and William-Adolphe Bouguereau. His first known work, Mère et l’enfant apres W. Bouguereau, was based on Bouguereau’s style, its brushstrokes barely visible and its figures strikingly lifelike. It was exhibited at Académie Julian and widely praised, but Hubbell left the school shortly after to study under James Abbott McNeill Whistler at Académie Carmen. Whistler believed that colors should be in harmony with one another and not necessarily correspond with the real world. His influence shaped Hubbell into a highly skilled colorist.

Hubbel first received public recognition with an Honorable Mention for Une belle occasion. Une petite cuisine” at the 1901 Paris Salon. He began to receive praise from the Parisian press and exhibited at the Paris Salon throughout the 1910s. After 1906, Hubbell’s style shifted towards Impressionism, as he explored the Impressionists’ use of bright color and light and softened his figures’ forms. In 1908, Hubbell joined the American Impressionist colony in Giverny, France, where he befriended Claude Monet. Two of his most lauded works, By the Fireside and The Orange Robe, were shown at the 1909 Paris Salon, and critics raved. French art critic Henry Austy wrote that The Orange Robe demonstrated “a happy daring in the arrangement of the tones, a harmony in the composition, and a beautiful sentiment of intimacy and elegance.” In 1909, Hubbell had five new paintings exhibited to the International Society of Painters, Sculptors and Gravers. Four paintings were sold the afternoon of the opening, and the French government purchased the fifth the following week.

In 1910, Hubbell moved back to the U.S., living in Chicago and New York before being hired as head of the Painting Department at Carnegie Institute of Technology, now Carnegie Mellon University. In 1924, Hubbell and his family moved to Miami, Florida, where he lived for the rest of his life.

Throughout his career, Hubbell often gravitated towards female subjects, and viewed them as spiritually elevated and idealized similar to the korai, young female figures of Greek art who were meant to transcend earthly hardships.

Hubbell built a reputation in America as the best portrait artist of his time, traveling across the country to paint figures such as Presidents Herbert Hoover and Franklin D. Roosevelt, Supreme Court Justice Harlan F. Stone, Secretary of the Interior Harold Ickes, and artist Harry Siddons Mowbray.