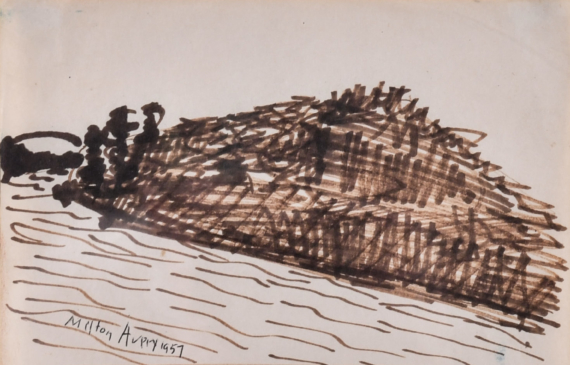 A quintessential artist of 20th century America, Milton Avery has gained wide recognition over the past 50 years as a household name, his work achieving sales prices in the millions of dollars. He was born to a working class family in upstate New York, and discovered his pension for the arts when he started to take night classes at a local arts school to mitigate the dullness of daily life as a factory worker. From there, he enrolled at the Connecticut League of Art Students in Hartford from 1905-1918, and then attended the School of Art at the Society of Hartford where he exhibited his works while working other jobs to support himself. He relocated to the New York City area in 1925 and attended sketch classes at the Art Students League in New York, where he befriended artists like Mark Rothko and Adolph Gottlieb. Despite having friends that were involved with various institutions in the city, Avery never joined any of these groups. He did, however, frequent galleries in the city where he was exposed to European artists of the day like Matisse and Picasso, artists who certainly influenced his own artistic trajectory. It was not until 1943, when he joined the Paul Rosenberg gallery, that he gained national attention and earned a retrospective at the Phillips Memorial Gallery. Regardless, museums took little interest in Avery’s work and he fell out of the limelight just as quickly as he had entered it. Towards the end of the 1950’s, however, critics turned their attention back on Avery and his work sold at a higher rate than before. Avery’s health had been impacted by a heart attack in 1949 that he never fully recovered from, making it difficult to work outdoors. His style shifted slightly after this to include only the most essential elements in each composition, weeding out extraneous components until the work obtained a sense of clarity.