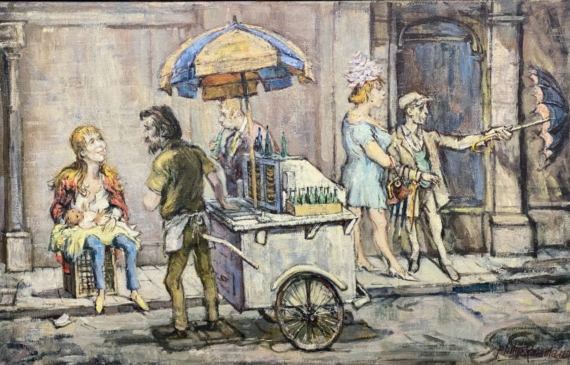 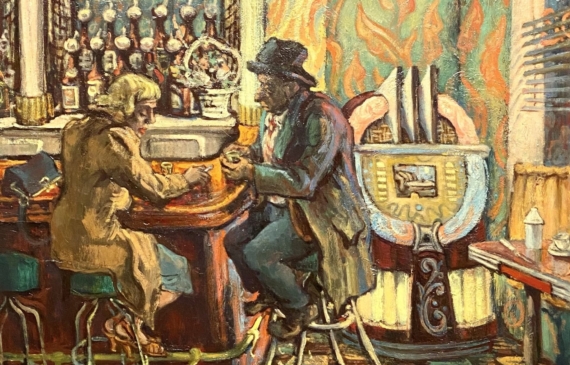 Philip Reisman was born July 18, 1904 in Warsaw, Poland. In 1908 his family moved to New York, where he would come to expressively interpret scenes of various daily labor, seedy nightclubs and reflective moments within the city.

Reisman studied at the Art Students League of New York under Wallace Morgan, George Bridgeman, George Luks and Frank Du Mond. He studied privately as well with Harry Wickes from 1927-1928.

The Works Project Administration (WPA) and the Public Works Art Project (PWAP) provided Resiman with opportunities for commission and travel during the 1930’s.

Exhibitions include several one-person shows at the ACA Gallery in New York between 1943 and 1963, and numerous group exhibitions with the National Academy of Design, Hudson Guild and Whitney Annual in New York.

Reisman also illustrated short stories for “Colliers” magazine and an edition of “Anna Karenina” for Random House and created a mural for the Bellevue Hospital, New York in 1937.

Reisman received awards from the Carnegie Institute, Nicholas Roerich Museum, National Academy of Design, American Academy and Institute of Arts and Letters, and the American Society of Contemporary Artists.

His works have been included in the public collections of the New York Public Library; Museum of Modern Art, New York; Metropolitan Museum of Art, New York; the National Academy of Design, New York and the Hirschorn Museum and Sculpture Garden of the Smithsonian Institution, Washington D.C.