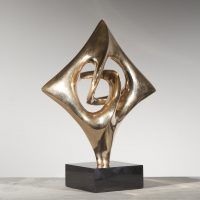 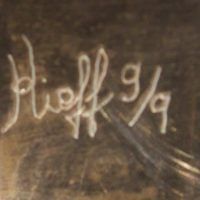 A sculptor, painter, graphic artist, draftsman, muralist, printmaker, jewellery maker and educator, Kieff Antonio Grediaga (signs his works “Kieff” ) was born in Madrid, Spain and has lived in Montreal and Saint Bruno (a suburb of Montreal), Quebec, Canada since 1969 (his late wife, whom he married in 1968, was Canadian). Although Grediaga’s oeuvre is impressive and wide ranging, he’s probably best known for his table-top bronzes and monumental public space sculptures.

Footnote:
(1) Please note: Several sources, mistakenly refer to the artist as Antonio Grediaga Kieff. His registered first name is Kieff and he was baptized Antonio. According to Grediaga’s website, he was named after Kiev the Ukrainian city where he his father, a Republican soldier, believed the tanks came from during the Spanish Civil War.
Note: While the story may be true, the connection is not that obvious.

Kieff Antonio Grediaga was born on May 28, 1936; the first shipment of T26 tanks arrived from Russia on October 12, 1936, and they were probably manufactured in Leningrad. We could not find a historic connection between the tanks supplied to Spain during the civil war and the city of Kiev, although there are many other avenues where there may be one, such as a military base, an individual, or a port of departure. The Soviet people and Stalin were enthusiastic supporters of the Republican side in the Spanish Civil War and they provided it with much humanitarian and military aid. In fact, they shipped more tanks to the Republicans (331) than Germany shipped to the Nationalists (122).