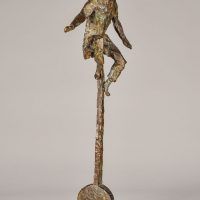 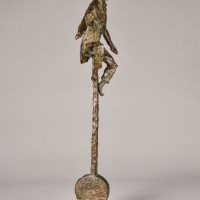 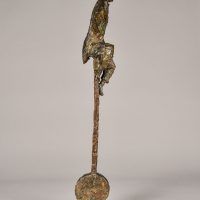 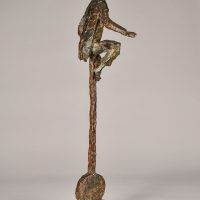 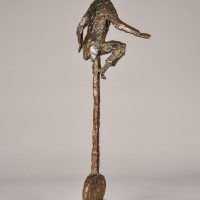 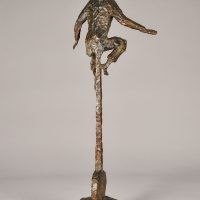 Chaim Gross is considered to be one of the greatest American Modernist sculptors, and his graphic work is also highly celebrated. Known for his direct wood carvings of animals, jubilant circus performers, and intimate mother and child pairings, Gross worked in a combination of traditional and tribal/folk styles to render figures in various states of solitude and joyous interdependence.

A native of Austria, Gross emigrated in 1921 as a teenager from war-torn Eastern Europe to New York City, where he studied sculpture at the Educational Alliance on the Lower East Side and came to know painters Moses and Raphael Soyer, Peter Blume, Adolph Gottlieb, and many other important 20th-century New York artists. Gross then expanded upon his study of sculpture with Robert Laurent at the Art Students League and Elie Nadelman at the Beaux-Arts Institute of Design.

Chaim Gross was fond of traveling and visited Cuba, Central America, West Africa, India and Indonesia to find native hardwoods to repurpose for his sculptural vision. In 1932, after his first solo exhibition in New York at Gallery 144, works by the artist were soon acquired by major American museums, including The Metropolitan Museum of Art and the Whitney Museum of American Art in New York.

In the years around World War II, Gross shifted focus to his European heritage and Judaic themes. He returned to the theme of acrobatic performers in the 1950s, inspired by a change in medium to cast bronze. Breaking free from the weight and solid mass of wood, his light and linear bronze works became even more dynamic and elegant, defying gravity with daring poses tumbling through space.

Today, the largest body of sculpture by Chaim Gross in a public collection resides at the Hirshhorn Museum in Washington D.C., and a permanent display of his sculpture is maintained at the artist’s historic townhouse and studio in Greenwich Village at The Renee and Chaim Gross Foundation. Works by Chaim Gross are included in many more important public collections, including the Art Institute of Chicago, IL; The Brooklyn Museum of Art, NY; the Butler Institute of Art, Cincinnati, OH; and the Chrysler Museum of Art, Norfolk, VA.