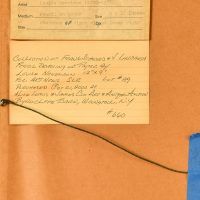 Louise Nevelson was born to a Jewish family in Russian Ukraine, but immigrated to Rockland, Maine, by the time she was 6 years old to avoid religious persecution. She had aspirations of being an artist from a young age, and met her husband Charles Nevelson when she was working as a stenographer to support her artistic studies. The couple moved to New York City in 1920, but separated by 1931 due to the family pressuring her to end her career in favor of raising a family. She studied at the Art Students League in New York from 1928-1930, and then traveled to Munich to learn under Hans Hofmann at his School for Modern Art until tensions in Germany rose and she returned to her studies at the Art Students League. Amidst her education, she encountered the legendary Frida Kahlo and Diego Rivera, assisting Rivera with a mural for the New Workers’ School. She was exposed to the indigenous pre-Columbian styles of Mexico when visiting them and traveling through Mexico and Central America, which inspired her relationship with her own work. She also worked for the Workers Progress Administration as an artist during the depression, along with artists including Arshile Gorky, Bertram Hartman, and Lee Krasner. The style so identifiable as Nevelson’s came to fruition in the 1950’s, when she started executing large scale works that oftentimes employed an array of scrap material.

She started to gain widespread acclaim in the same decade, receiving a spot exhibiting in the MoMa with famous names like Robert Rauschenberg and Jasper Johns by 1959. She had initially faced much adversity for being a female artist, but this never hindered her progress and she thrived regardless, rising to be a competitive equal to her male counterparts. She was selected to represent America at the 1962 Venice Biennale, securing her position as a leading artist of the time. Five years later, she received a retrospective at the Whitney Museum of American Art that showed over 100 of her own  works. She did multiple monumental outdoor sculptures through the 1970’s, the first of which was completed for Princeton University. During her life and after her death, she was a pioneer of the arts – not just for the successive generations of women artists, but for the world. Nevelson was an innovator of installation sculpture, paving the way for the rise of installation art into what it is today.