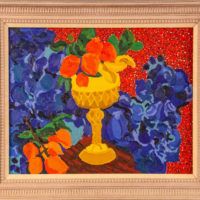 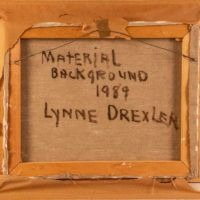 Exposed to the arts early on in life, Lynne Drexler always had an affinity for painting. She grew up an only child in Newport News, Virginia, and her parents put her through a number of arts classes as a child, leading her to study painting first at the Richmond Professional Institute and later at the College of William and Mary, where she obtained her Bachelor’s degree in 1956. On the advice of an uncle who had ties to the New York art scene, Drexler relocated to learn under Hans Hofmann at both his New York and Provincetown schools. Hofmann imparted to her that composition is influenced by color, a concept that would stick with her as she refined her style. Shortly after, she enrolled at Hunter College to study under Robert Motherwell, another important influence on the burgeoning young artist.

In 1961, Drexler’s paintings caught the attention of artists who were members of the Tanager Gallery, and she earned her first solo exhibition that presented newly created large-scale paintings indicative of her evolving style. That same year, she married fellow artist John Hultberg, whom she had met at the Artist’s Club, where creatives would gather to discuss the current state of art and critique each other’s work. The couple spent the next few years traveling to the West Coast, Hawaii, and Mexico in search of fresh job opportunities. While staying in Los Angeles, Drexler exhibited at the Esther Robles Gallery, a then-staple in the LA art world, and received write ups from multiple local news sources.

Drexler and Hultberg returned to New York in 1967, and took up residence at the Chelsea Hotel, a well-known hub for artists, writers, and composers. Drexler herself was always enamored with classical music, attending the opera two or three times a week. Her style came to incorporate elements of music, and she would draw sketches at the opera that would translate into larger canvases, invoking an element of lyricism within her work. It was admittedly difficult for her to work at the Chelsea Hotel with its chaotic rock and roll culture, and during this time Drexler developed serious eyesight problems that caused her to be colorblind for about six months. Her husband was achieving more success exhibiting while she was struggling to gain traction with her work, and she fell into a deep depression that lead to a suicide attempt. As a necessary escape from the city, the couple bought a house on Monhegan Island in 1971, and would spend summers there to rest and recuperate from the stress of city life.

By 1983, Drexler made the move to Monhegan permanently and lived there year round, which was a turning point for the artist. She withdrew from the rat race of New York and simply created artwork she would sell to locals and tourists, generating just enough money to support herself. Her work gained critical attention after her death , and she received a retrospective at the Monhegan Museum in 2008 that also traveled to the Portland Museum of Art. In 2022, her auction record skyrocketed, with a painting estimated to sell between $40,000 to $60,000 fetching over $1,000,000 at Christie’s. Her work is now housed in the collections of the Art Institute of Chicago; Brooklyn Museum; Museum of Modern Art, New York; National Gallery of Art, Washington, D.C.; Farnsworth Art Museum, Rockland, among others.