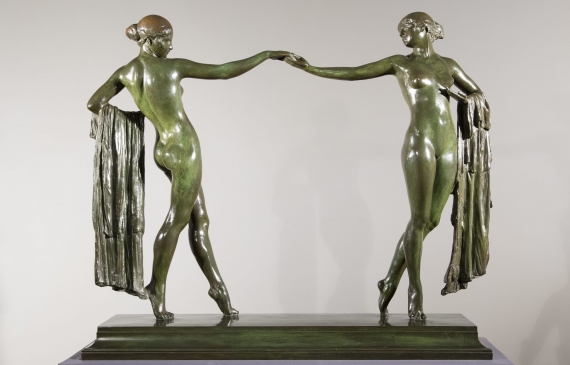 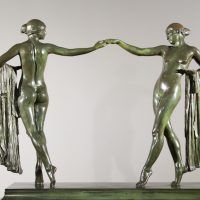 One of Korbel’s best-known sculptures, this composition has been called both Andante and Dancing Girls. In 1917 Korbel reworked an allegorical group, Architecture and Sculpture (ca. 1916), which depicts two dancing nudes holding products of their arts—one, a model of a building, and the other, a statuette.

For Andante, Korbel removed the attributes and added stylized draperies to unify and balance the composition of two dancers on tiptoe facing one another and touching with the fingers of their right hands. Andante is one of a series of dancing figures by Korbel, its title referring to the moderate pace of the figures’ rhythmic movement. Whereas the drapery falling in deep and precise folds from the nudes’ bent left arms gives the composition a formality that suggests the artist’s indebtedness to early classical Greek sculpture, the smooth surfaces and idealized bodies of the two young women parallel the simplified nudes of Aristide Maillol. Andante was included in Korbel’s one-artist exhibition at the Gorham Galleries on Fifth Avenue, in 1917.

Andante was cast in an edition of seven, one of which was purchased by The Metropolitan Museum of Art. In 1926, Korbel enlarged Andante to a scale of 43 inches high and made two castings in this size. 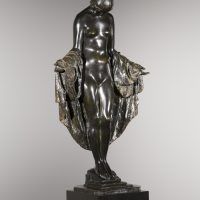 He was born in Osik, Bohemia (now Czech Republic) on March 22, 1882 to a clergyman, Joseph Korbel and his wife Katherina Dolezal Korbel. He began studying sculpture in his homeland, continuing his studies after moving to the United States at age 18. He returned to Europe and continued his studies in Berlin, Munich and Paris.

He was one of a dozen sculptors invited to compete in the Pioneer Woman statue competition in 1927, which he failed to win.

Korbel was a member of the National Sculpture Society. He was elected into the National Academy of Design in 1937 as an Associate member and became a full Academician in 1944.