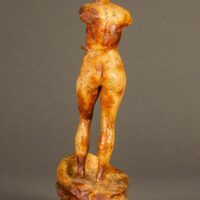 Robert White was born in New York on September 19, 1921, to architect Lawerence Grant White and his wife, Laura Astor White. By age twelve Robert wanted to become a sculptor because of the environment in which he grew up, bolstered by the encouragement of his teachers and family members. White longed to devote all of his time to study drawings, painting and sculpture; art was the only thing that kept him focused, and he felt he had so much to learn.

He served in the United States Coast Guard during World War II and subsequently taught art at the Parsons School of Design from 1949-1952. White moved back to the city after the war, and was introduced to successful artists such as sculptor Wheeler Williams and painter Barry Faulkner. However White turned away from the aesthetic that was the status quo of his father’s generation. After White’s father died, he settled into his mother’s studio in one of the barns of the family’s Box Hill estate on Long Island, New York. It was then he began working heavily with sculpture, the influence of German sculptor Wilhelm Lehmbruck is clearly visible in White’s elongated draped figures, but the mannerism is less pronounced. White’s approach to his figures is lyrical and totemic, a precursor of his later female presences such as Salomè, 1955.

Robert White and his wife Claire Nicolas moved to Rome where he became a fellow of the American Academy of Rome from 1952-1955. White was truly inspired by the Romans’ artwork, as well as Modern Italian like Marino Marini and Mirko Basaldella, but most of all, Giacomo Manzu. The latter’s tender renderings of the human figure became perhaps his greatest influence, and later when he returned to New York his friends would call him the American Manzu. In 1955, White moved to Long Island and abandoned the aesthetic perfection of the Italians to tackle robust, powerful American physique. His Ploughman, 1958, figure was inspired by a local farmer, his commission for an eight foot bronze St. Anthony by a neighboring Irish carpenter. Though the St. Anthony still has a Roman monumentality, the Ploughman is a rough figure that is reminiscent of Rodin. Another large relief of a half submerged swimmer depicts a strong female figure, sensuous but robust. The refinement of the Roman influence increasingly gave way to a more realistic physicality, totally devoid of mannerism. He also began to work in a freer, larger scale, embracing a more heroic, dramatic approach.

White would often use his own body as a model for his male figures. He continuously drew live models in his drawing classes or in his studio, more as exercises than as models for his sculptures. His first retrospective show was at Stony Brook University in 1962, where he continued his career as an art teacher. His life-drawing classes were continuously popular; one of his students, Linda Cassidy wrote, “Like all great teachers, he offered that perfect balance between guidance and freedom. He insisted we study figures in order to learn structure, rhyme, harmony and flow. The rigors of the hundreds of hours spent doing battle with figure drawing has stayed with me, as have his words.” White became involved with the Artist’s Choice Museum and began to show regularly at the National Academy of Design. He also exhibited in New York City at James Graham & Sons Gallery and Davis Galleries. White was named a trustee of the St. Gaudens Memorial in Cornish, New Hampshire and taught one summer at the Skowhegan School where he gave a slide show and lecture about his work.