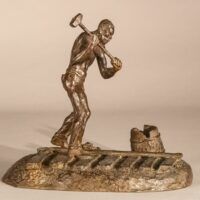 “Named after his great-uncle, a five-term senator, Thomas Hart Benton was born on April 15, 1889, in Neosho, Missouri. His father, Maecenus Eason Benton, was a lawyer and a United States representative from 1896 to 1904, so the young Benton spent his early years in both Washington, DC, and southwest Missouri. Benton dropped out of high school at 17 and started working as a cartoonist for the Joplin American newspaper. His mother, Elizabeth Wise Benton, was supportive of his artistic ambitions, but Benton’s father enrolled him in the Western Military Academy in Alton, Illinois, in 1906 before agreeing to allow him to attend the Art Institute of Chicago in 1907. The following year Benton traveled to Paris and studied at the Académie Julian. There he met California artist Stanton Macdonald-Wright (American, 1890 – 1973) and began to experiment with Macdonald-Wright’s synchromist style of abstract painting. In 1911 he returned to the United States and settled in New York. He taught briefly at the Chelsea Neighborhood Association, where he met his future wife, Rita Piacenza, one of his students. During World War I Benton served at the naval base in Norfolk, Virginia, where he made illustrations for a catalog of ships and military equipment. After the war Benton went back to New York, and in 1922 he married Piacenza. The couple was married for 53 years and had two children. They regularly spent summers on Martha’s Vineyard, Massachusetts.

Benton’s work until the early 1920s was generally modernist and often abstract. In 1924, however, Benton traveled to Missouri to see his sick father. Returning to his home state inspired him to reclaim his midwestern roots and break with modernism, focusing instead on American rural subjects such as life in steel mills, logging camps, coal mines, and cotton fields. Because of his leftist political leanings he championed working class people and represented them as heroes in his paintings and murals. Benton began to paint in a naturalistic style that was influenced by the Spanish master El Greco (Greek, 1541 – 1614), and he became known as the most innovative practitioner of mural painting in a decade of great importance for this medium in America. He completed monumental mural cycles for the New School for Social Research (America Today, 1930–1931, Metropolitan Museum of Art), the Whitney Museum of American Art (The Arts of Life in America, 1932, New Britain Museum of American Art), and the 1933 Chicago World’s Fair (The Social History of Indiana, Indiana University), all of which aroused controversy because of their political content. By December 24, 1934, when Benton became the first artist to have a work (a self-portrait) featured on the cover of Time magazine, he was regarded as one of the three leading American regionalist painters, along with Grant Wood (American, 1891 – 1942) and John Steuart Curry (American, 1897 – 1946). Throughout this period Benton was an influential teacher at the Art Students League in New York, where Jackson Pollock (American, 1912 – 1956) was one of his students.

In 1935 Benton left New York and permanently settled in Kansas City, Missouri, where he taught at the Art Institute. His first major project there was a mural for the Missouri State Capitol, A Social History of the State of Missouri (1936). During this period Benton also completed oil paintings, including two classical nudes in midwestern settings—Susanna and the Elders (1938, Fine Arts Museums of San Francisco) and Persephone (1938–1939, Nelson-Atkins Museum of Art, Kansas City, MO)—and more traditional regionalist subjects such as July Hay (1943, The Metropolitan Museum of Art). He published his autobiography, An Artist in America, in 1937. The Nelson-Atkins Museum of Art and the Associated American Artists Gallery in New York held a successful retrospective of Benton’s work in 1939. However, Benton’s frequent controversial statements and harsh criticisms of the Kansas City art establishment resulted in his being fired from the Art Institute in 1941, and enemies frequently attacked his work for being vulgar and unpatriotic. After World War II regionalism fell out of fashion, but Benton continued to paint rural subjects for the next 30 years, including a number of mural commissions. These later works generally lack social commentary and are nostalgic views of the preindustrial Midwest. Benton died of a heart attack on January 19, 1975, in Kansas City, just after putting the finishing touches on a large mural for the Country Music Hall of Fame in Nashville, Tennessee.”

Biography by Robert Torchia and Catherine Southwick, courtesy of the National Gallery of Art,