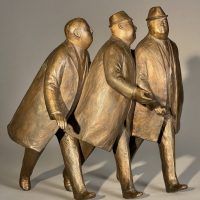 William McElcheran (1927-1999) embraced a variety of media as his means of expression. He was equally proficient at drawing, painting, bas-relief and sculpture. Quickly, he became one of the most accomplished and versatile figurative sculptors of the 20th century. McElcheran is well-known for his businessmen which are included in influential collections on three continents. .

The wit, humor and irony of these pieces comes from his combination of masterful craftsmanship, moral courage and intellect which gave rise to the powerful humanism which animates his oeuvre. Bill McElcheran, the sculptor, always kept in mind the context of his work as he created each individual piece. His businessmen aren’t mere bronze figures; these hurrying figures touch the world with their relevant and immediately identifiable subject matter. He distilled his bronzes into classic forms which never lost their grace and movement.

A virtuoso, Bill started modeling realistic portraits at the age of 10. He was given advanced standing into second year at the Ontario College of Art at the age of 16 due to his exceptional ability and his considerable body of work. His natural talent blossomed there earning him a painting scholarship and later the Lieutenant-Governor’s Medal. Most nights he attended life drawing classes after painting and modelling from the figure all day. He even made a special arrangement with the custodian to let him in early so that he could do an hour’s work—sculpting in clay—before classes started. During his lengthy professional career, he worked in a variety of media—from carving in wood and marble to modeling in clay to casting in fiberglass and bronze. From early on, Bill McElcheran resolved to have any recognition of his work based on content rather than form. He was determined to be recognized for the humanism of his sculpture. This resolve ultimately led him to create his ‘non-hero’ or ‘everyman’— the single, bronze businessman.